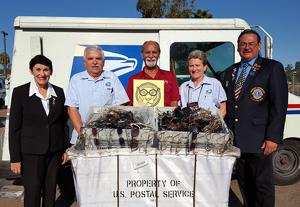 It’s simple. Just place your used eyeglasses in a sandwich bag in your mailbox. The results of that simple action will amaze you. The Lions Club donates those used eyeglasses all over the world. In many cases the recipients of the glasses cry, because for the first time they are able to see their loved ones. Readers, children’s eyeglasses, and sunglasses (for farm workers) are all collected to help those who can’t afford a pair through “Recycle for Sight.”

This past Friday Sept. 4 marked the kickoff of the “old peepers” collection. Lions District 4-L6 has partnered with the San Diego post office for the past 15 years and mail carriers had the extra duty to collect used eyeglasses. The glasses are then sorted, sanitized, calibrated and tagged and distributed during the club’s medical missions. In the past year postal carriers have collected 180,000 pairs of eyeglasses.

Lions Club member Don Kelly, a 42-year resident of Imperial Beach was a mail carrier and when he still had his route in Chula Vista he remembers collecting eyeglasses as well. Kelly, a member for 25 years, is a past president and club director of the Montgomery Lions Club of Chula Vista. He explained there is no active Lions Club in Imperial Beach and the neighboring towns take care of the areas that don’t have a club.

Kelly said eyeglasses could also be placed in mail collection boxes. He sometimes gets calls from would-be donors that say their mail slot is too small for glasses to fit in and he recommended giving the glasses to the manager if in a building or placing them directly in the mail box at the post office. Kelly said all the mail carriers are on board with the collection. “It’s done through the union and patterned after the canned food collection drive.

“We love the notes,” said Alice Tana, Lions past district governor, of the messages people leave with their glasses like “Dear Mr. Post Master, please make sure this gets to the Lions.” Tana explained that often Lions partner with Doctors Without Borders and church groups on their way to a mission to developing countries and the club gives them suitcases full of eyeglasses to take with them.

Recently the Lions took part of Stand Down for Veterans and 282 vets received donated glasses.

The Lions started as a club in 1917 but it wasn’t until 1925 when Helen Keller, the first deaf blind woman who earned a bachelor of arts degree, spoke at the club’s convention and said that the club should be the knight of the blind. At that point eyesight became the main focus for the Lions. “Before that the Lions would chose a project designed to be helpful, but after that, they put all their effort into [eyesight]” said Kelly.

Lions also offer clinics for low income residents who are fit with eyeglasses. Tana remembers one woman in particular. “A little elderly lady said ‘I can see the faces of my children and my grandchildren.’ She started crying, then she laughed and said ‘I can read my Bible now,’” recalled Tana of the encounter.

In another instance when Lions were doing a clinic in Rancho Bernardo, a teacher came into the clinic and explained that she had a student in her class that was failing and she thought it was because of his sight. The doctor, by the name of Murray Rice, told the teacher he would personally go to the school and meet with her and the student and examine him. Two weeks later the boy was fit with glasses. Six months later the teacher saw the doctor again and told him, “I want to thank you. You took an F student and made him an A student,” said Tana.

Kelly explained he has been able to help students who needed glasses. He is in touch with the nurses at all the elementary schools in Imperial Beach. “We have a standing agreement. If a child comes in with no insurance, they call me and we try to get him to the Lions Optometric Clinic on Upas Street,” he said. Kelly explained that if the family can pay they are only charged $40; otherwise the exam and eyeglasses are free.

Kelly also said through the Sight and Hearing Foundation the Lions were able to help an Imperial Beach child whose teacher noticed he had something growing across his eye. The boy had surgery thanks to the Lions. “We’re always raising funds, especially for surgeries. All the Lions Clubs have a budget for the the Sight and Hearing Foundation. We have connections with the Shiley Eye Center and the Eye Institute in Los Angeles,” said Tana.

“We’ve helped a lot of kids,’ said Kelly proudly. Kelly also works with optometrists who save used eyeglasses for the Lions.

Kelly also repairs eyeglasses after they are collected. “I screen them, check for scratches. If the lenses can’t be used I cut them,” he said about the repairs.

Kelly has a saying for his mission. “I know somebody out there can fix everything. The only reason he can’t is because he doesn’t have a pair of eyeglasses,” he said.

Even though their main collection day was Sept. 4, the Lions and letter carriers continue to collect used eyeglasses of all kinds. Place eyeglasses in plastic bags and put into your mailbox or take to the post office.

The Lions also collect hearing aids which should be placed in separate bags if also donating eyeglasses.

What would it be like to live without plastic? How much waste could we keep out of landfills, waterways and oceans if we all refused single-use … END_OF_DOCUMENT_TOKEN_TO_BE_REPLACED