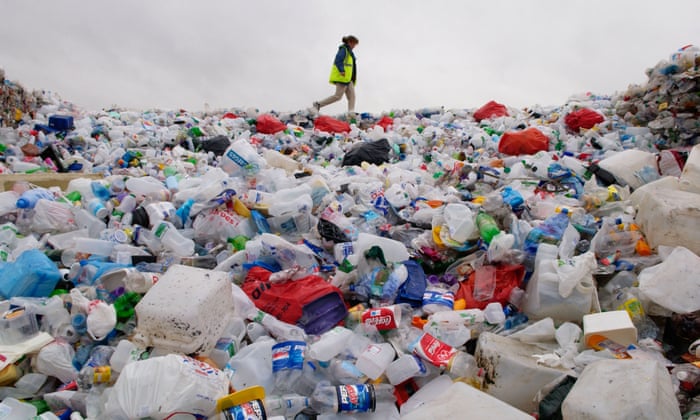 Wales ranks second in the world for recycling household waste but England lags far behind other European countries, according to new research.

Policies brought in by the Welsh government and a target to be zero waste by 2050 have driven the country up the league table to come in just under Germany. With recycling rates of 63.8% for municipal solid waste, which includes household plastic and other packaging, Wales is set to become the world leader for recycling by next year, according to a report from the environmental analysts Eunomia.

But in England, where recycling rates have been flatlining, Michael Gove, the environment secretary, will be under pressure over rates of just 42.8%. England ranks 18th in the world, behind South Korea, Taiwan, the Netherlands, Slovenia, Belgium, Switzerland and Italy, among others.

The report examined reported recycling rates of municipal solid waste, which is made up of everyday items that are disposed of by the public at home or on the go.

Dominic Hogg, chairman of Eunomia, said: “It’s great to see the ambition of the Welsh bearing fruit, with their recycling rates close to the top of the table. It’s embarrassing for England, which … is standing still in terms of performance and dropping in the rankings as others continue to progress. We know that the public is concerned about the growing problem of waste, especially the way plastics are dealt with.”

Countries that made it into the top 10 had recycling rates of more than 50%. There were key themes and policies shared by those countries doing well on recycling.

A Welsh government spokesperson said: “In the 20 years since devolution, Wales’s recycling rate has increased from just under 5% to 64%. We are well on track to meet our 70% target by 2025.

“Our success has been achieved through a comprehensive package of measures. These include statutory targets, funding, principled, progressive leadership and a firm commitment from local authorities and the Welsh public to reducing, reusing and recycling.

“We are always looking at how we can continue to improve. Earlier this year, Cabinet secretary Lesley Griffiths announced her plans to halve food waste by 2025. We are confident this is achievable thanks to the enthusiasm that exists in Wales to recycling.”

Gove has said a bottle deposit scheme is a great idea and called for views on setting one up.

But experts are concerned that with local council budgets facing further cuts and no sign of central government investment in improving recycling rates, England will continue to fail to raise levels of recycling.

The Recycling Association last week called for more responsibility throughout the supply chain to make recycling easier for the public.

Chinese ban on plastic waste imports could see UK pollution rise
Read more
Simon Ellin of the Recycling Association said: “Central government needs to put money into the system to make it work. Local authorities have been cut, they can’t afford to do a lot of the work around recycling, they aren’t doing the communicating with the public or the advertising. All that impacts on recycling rates.

“If the government is serious about waste recycling they need a coherent plan and they need to put the investment in.”

The report comes as local authorities face more challenges from an imminent ban by the Chinese government on importing household waste.

Experts say the higher cost of recycling could see some local authorities reducing collections and not collecting some plastics.

Since you’re here …
… we have a small favour to ask. More people are reading the Guardian than ever but advertising revenues across the media are falling fast. And unlike many news organisations, we haven’t put up a paywall – we want to keep our journalism as open as we can. So you can see why we need to ask for your help. The Guardian’s independent, investigative journalism takes a lot of time, money and hard work to produce. But we do it because we believe our perspective matters – because it might well be your perspective, too.

I appreciate there not being a paywall: it is more democratic for the media to be available for all and not a commodity to be purchased by a few. I’m happy to make a contribution so others with less means still have access to information.
Thomasine F-R.
If everyone who reads our reporting, who likes it, helps fund it, our future would be much more secure. For as little as $1, you can support the Guardian – and it only takes a minute. Thank you.

What would it be like to live without plastic? How much waste could we keep out of landfills, waterways and oceans if we all refused single-use … END_OF_DOCUMENT_TOKEN_TO_BE_REPLACED