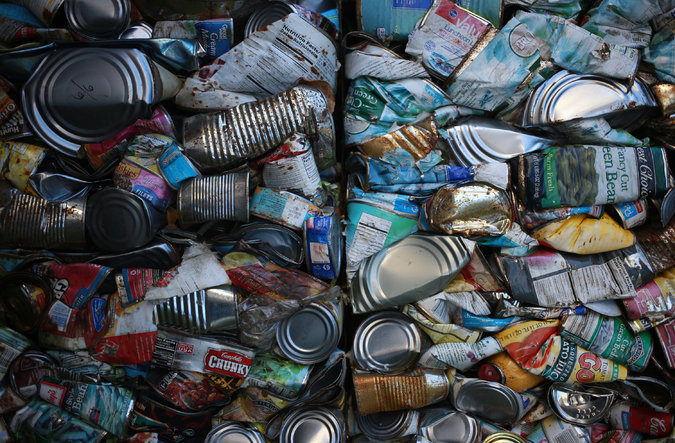 Readers take issue with a Sunday Review essay that said recycling has failed in economic and environmental terms.

To the Editor: Re “The Reign of Recycling” (Sunday Review, Oct. 4):

A garbage tax (on trash that goes to the landfill) will likely do the exact opposite. Behavioral research has taught us that giving people the option to “buy out” of their environmental responsibility undermines their personal motivation to help.

Long-term environmental problems call for long-term changes in human behavior. Advising people to stuff their garbage deep inside the earth because that’s what we have always done is exactly the type of thinking that got us here in the first place. Just because societies had open sewage systems for over a thousand years doesn’t mean it is a good idea. Whatever the inefficiencies of the recycling process may be, misinforming people that recycling is a waste of time is not going to help the environment.

The writer is a researcher, lecturer and social psychologist at Princeton University who directs the Social and Environmental Decision-Making Lab.

“The Reign of Recycling” and its attack on the benefits of recycling could not have been more off-base.

Recycling and composting are cost-effective and efficient ways to fight climate change and provide other social and environmental benefits.

For example, San Francisco’s pioneering composting program uses food scraps and yard trimmings to produce rich soil for farmers in California instead of sending them to the landfill, where they would produce methane, a potent greenhouse gas. In addition, soil produced from compost retains up to 20 times its weight in water, a significant benefit during California’s drought.

It only makes sense for the State of California to effectively eliminate the disposal of organic material by 2025 by turning it into more useful products. Moreover, processing recycleables can create 20 times as many jobs as sending material to landfills.

After more than a thousand years of burying our trash in landfills, it is time to update the use and disposal of precious resources for the 21st century.

The writer is the mayor of San Francisco.

To the Editor: John Tierney’s sadly shortsighted essay on recycling completely misses the key problem in our consuming society: the front end. With the production side held completely unaccountable, recycling becomes an impossible game of catch-up. Mr. Tierney, as he’s done so often before, scorns the left hand for trying to clean up a horrific mess that the right hand has created.

A sane solution would be to require everything that our society produces and consumes to be reusable or compostable, with a clear plan where it will all go once it’s served its initial purpose. Is that really so hard to do?

To the Editor: Recycling does seem very costly compared with its supposed benefits.

Some readers are old enough (as I am) to remember when soda and beer bottles were returned to the store where purchased and, instead of being crushed, were refilled with the same product and then resold. With modern means, couldn’t chips be incorporated into appropriate containers to expedite the process? Is it really necessary to destroy and remake containers, particularly energy-intensive glass and aluminum?

Refilling instead of recycling could provide local jobs and avoid the costs, economic and environmental, of transporting the recycled material vast distances to be reutilized.

New labeling could be applied to help alleviate the American abhorrence of “used” containers.

To the Editor: John Tierney misses the point of recycling by largely limiting his viewpoint of its benefits to monetization of waste. Surely the question of whether money can be made from recycling is of interest only to corporations in the business of processing waste.

Few countries in the world are blessed with both enough space to hide waste in landfills and the infrastructure needed to move waste from consumers to landfills. In traveling the globe, I’ve been struck repeatedly by scenes such as the vast numbers of plastic bags blowing across the Moroccan desert and household waste simply dumped in many Asian villages.

Many people living in or close to poverty simply have no options for getting rid of inorganic household waste that cannot be processed locally. Recycling is one important channel in a comprehensive program for waste management that delivers a clean, safe living space.

While first-world countries can pat themselves on the back for progress with paper, metal and plastics, the record is not good for many other kinds of waste, much of it dangerous. In the United States, options for handling toxic fluids such as automotive oil and paint thinners are inconvenient to consumers and not widely available. The same is true for pharmaceuticals, which when flushed into bodies of water endanger wildlife and whole ecosystems.

Globally, there remains much to be done, and making a buck should not be anyone’s priority.

To the Editor: While it is true that recycling post-consumer plastics has been a tough nut to crack technologically, and recovery rates have plateaued at about 30 percent nationally, tremendous progress has been made in just the past few years.

I am chairman of a recycling company that has spent the past eight years developing a sustainable business model, driven by new technology and no government handouts, to take unsorted post-consumer plastic waste from residents and separate everything automatically so that every single resin type and plastic form is usable by a paying customer.

Just last year, we signed our first contract to supply 300 million pounds of previously nonrecyclable plastic to a Fortune 500 company. Our projections are that this technology, when rolled out nationally, will be diverting three billion pounds of plastic waste from our city streets, oceans and landfills by 2020.

With so much blood and treasure spent to secure the petroleum-based resources to make plastics, it is thoroughly immoral to simply throw them back into a hole.

To the Editor: Incredibly, John Tierney fails to mention the most obvious, and most important, alternative (or complement) to recycling: reducing waste to begin with. It’s not that hard.

Ten years ago I started carrying around a stainless steel water bottle everywhere I go. This one easy step dissolved my need for not only bottled water, but most other to-go drinks, too. Same goes for my trusty morning thermos — my coffee stays hotter, there’s no leaching from cheap Styrofoam or plastic-lined cups, and no waste. Same for take-out: Eat there or cook at home, and forgo the mountain of waste.

The list goes on: reusable grocery bags, buying bulk dry goods rather than individually packaged, forgoing the plastic bag at the corner store. You get the idea. These few strategies dramatically reduce the amount of trash and recycling I generate on any given day. It’s not hard; just do it.

To the Editor: The elephant in the room in John Tierney’s article is: Why do we continue to manufacture plastic for spurious purposes? We hear about the Great Pacific Garbage Patch, about microplastics that are poisoning the sea, about turtles shaped like hourglasses because they grow inside a six-pack ring.

We can drink tap water out of nondisposable containers rather than bottled water; we do not need to drink coffee from a Styrofoam cup with a half life of hundreds of years; and we do not need large plastic toys for children. Plastic should be treated as a special material that can be a life saver in medical uses (stents) and marvelous for things like flexible plumbing pipe. But pretending that we can throw it away without consequences is criminal.

Driven by technology and economics, parts of the country are moving away from the current recycling model. Optical sorting, computerized scanning and enhanced mechanical devices have made such developments possible. Montgomery, Ala., established a new system in which residents no longer sort their trash. Instead, the material goes to a sorting facility, where organics are separated from inorganics, and metals, paper, glass and plastic are sorted. The plan is for the organics go to an anaerobic digester; only the residue from the process will be landfilled.

In California, localities such as San Jose are experimenting with a system in which “wet trash” (organics) are placed in one bin, and “dry trash” (everything else) in another bin. The dry portion is mechanically and optically sorted for recyclables of value, and the organic fraction is diverted to an anaerobic digester and used for energy.

While neither of these approaches achieves zero waste, 60 to 70 percent of the stream is being repurposed.

The writer is president of Governmental Advisory Associates.

What would it be like to live without plastic? How much waste could we keep out of landfills, waterways and oceans if we all refused single-use … END_OF_DOCUMENT_TOKEN_TO_BE_REPLACED